This is what you call a brutal and violent knockout. I don't know any fans who watch Bellator but if they keep having nice knockouts like this, I'll be sure to tune in one day.

Video: Black guy gets sucker punched in the ghetto

Here's another fight video for everyone. Two black men square off and get ready to duke it out when a bystander decides to go with the sucker punch. This is why street fights are dangerous. 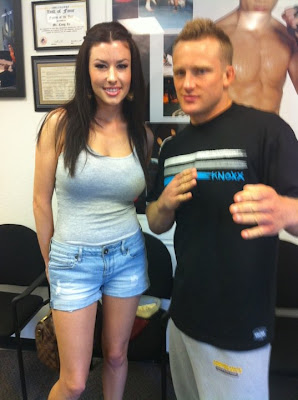 The fight will be a part of the Strikeforce Challengers card on June 24 which will be shown on Showtime.

In the video interview below, Terry talks about Fodor, why he likes to kickbox and knock people out, and how close he thinks he is from a title shot against Strikeforce lightweight champion, Gilbert Melendez.

Terry also tells DiVita that he has a lot of respect for fellow Strikeforce lightweight, Ryan Couture, but he feels he would beat him badly.

I have seen some previous interviews with Terry before and he looked more focused and intensed in this interview than in any other interview he has had.

Terry showed much more personality and charisma in this video interview than in all of his other interviews combined.

Let's hope he brings the intensity Friday night in his fight against Fodor so the fans can be entertained.

Former Lincoln High School graduate Deshon Marman was arrested for resisting arrest after arguing with US Airway employees and security about his pants sagging down.

Is this racist? Most likely. The US Airways employees should be ashamed of themselves for singling out the young Black male who now plays football for the University of New Mexico.

Video footage of the incident is below. Marman is nothing but respectful to the employees and security.

LeBron James to join the WNBA

Why the Arizona Diamondbacks can win the NL West

If you read the local Bay Area newspapers or listen to the San Francisco Giants' flagship station, KNBR, you would think that the Arizona Diamondbacks have no shot of winning the NL West.

The local sportswriters and sports talk radio hosts in the Bay Area are always quick to dismiss the Diamondbacks as serious contenders.

I strongly disagree with these nonbelievers of the Diamondbacks though. How can you dismiss a team that plays their home games in a hitters' haven and have legitimate power bats such as Justin Upton and Chris Young?

Arizona also has a quality shortstop in Stephen Drew and a savvy veteran catcher in Miguel Montero.

3B Ryan Roberts isn't too shabby either with 10 homers and 28 RBIs.

How can you say a team can't contend when they lead the NL in homers and slugging percentage?

The Diamondbacks' pitching staff was a weakness for them in 2010 but they are a lot better this year.

Last year, the bullpen would give up leads and blow saves but Arizona now has a steady bullpen led by their closer J.J. Putz.

Their starting rotation is led by youngsters like Ian Kennedy, Daniel Hudson, and Josh Collmenter. Veteran lefties Zach Duke and Joe Saunders round up their starting five.

Collmenter is in the running for Rookie of the Year and his awkward delivery makes it hard for hitters to time his pitches. Kennedy pitches like a veteran and has a lot of poise while Hudson has a great fastball.

The Giants are not going to run away with the division because they can't hit at all. Every win for the Giants is a one-run affair and the only reason they are in first place is because of their pitching.

The Diamondbacks are legitimate contenders for the NL West title and I expect them to challenge the Giants all the way to early October.
Posted by D Wizzle at 8:37 PM 6 comments:

LeBron James talks down to all the haters

Here's a short video clip from last night's post game NBA Finals press conference with LeBron James. In the clip, James is asked to comment about the fans who enjoy seeing him fail.

James said that the haters will still have personal problems when they wake up. These comments sure won't garner him any new fans.

Dusty Baker and the Reds head out to the West Coast for a seven game road trip starting Thursday night in San Francisco for four games before heading to Los Angeles to play the Dodgers.

The Reds are in third place in the NL Central and are five games back of the first place Cardinals.

The two best hitters on the Reds are Joey Votto and Jay Bruce. The good news for the Giants is that they are both left handed and left handed hitters don't usually fare very well in AT&T Park.

Besides Votto and Bruce, the only other dangerous batter in their lineup is 2B Brandon Phillips. 3B Scott Rolen is still a good hitter but he has been ill with a throat issue.

The Giants will see two former teammates in this series as SS Edgar Renteria and OF Fred Lewis will be getting their World Series rings on Thursday.

Neither Renteria or Lewis have contributed much to the Reds' offense so far this season. Lewis gets an occasional start in left field against right handers while Renteria is backing up the offensively inept Paul Janish.

The pitching match-ups are Johnny Cueto vs. Madison Bumgarner on Thursday, Travis Wood vs. Ryan Vogelsong on Friday, Mike Leake vs. Tim Lincecum on Saturday afternoon, and Edison Volquez vs. Jonathan Sanchez on Sunday night.

Sunday's game will be shown on ESPN and features two pitchers that love to walk batters.

The four game series is a very crucial series for both teams even though we are still in June.

The Reds don't want to fall too far behind first place while the Giants must show that they can still win games without Buster Posey behind the plate and batting cleanup.
Posted by D Wizzle at 11:12 PM 1 comment:

It is good to know that today is the day that former New York Giants WR Plaxico Burress gets to come home. He will be released from jail today after serving two years for shooting himself with his gun at a club in New York.

He is now 34 years old but I expect and hope that he will revive his career just like Michael Vick did. Lots of teams could use a talented and tall WR like Burress.

UFC's TUF 13 Finale on Saturday night in Las Vegas had a main event that didn't live up to its hype. Anthony Pettis and Clay Guida fought basically to a standstill for three rounds. Guida got the takedowns to win by unanimous decision but there was hardly a scratch on Pettis' face.

Let's hope UFC 131 this Saturday night will be more exciting with Shane Carwin vs. Junior Dos Santos as the main event.

Another close game last night between the Heat and the Mavs in the NBA Finals. The Heat won the game 88-86.

The key to the win was Dwyane Wade's clutch three-pointer in the fourth quarter to give the Heat a 84-78 lead. Jason Kidd was guarding Wade on that play and he should have forced Wade to drive and make a shot in the paint rather than give him the three from the top of the key.

According to former NBA ref Tim Donaghy, the NBA and David Stern will break even if the series goes five games and if it goes more than five, the NBA will make millions.

The San Francisco Giants are fortunate that Buster Posey hurt his leg in late May rather than in late August or September. This gives the team and GM Brian Sabean more time to find a replacement for Posey.

I would not be surprised if the Oakland A's fire Bob Geren on this East Coast road trip. The A's have lost six in a row.
Posted by D Wizzle at 7:32 AM No comments:

Inside the Numbers: Why the Oakland A's can't score runs and why Bob Geren might get fired

The Oakland A's are only 27-30 and in last place in the American League West. Their pitching has been solid this season even without the services of Dallas Braden for most of the season.

The problem with the A's is their pathetic offense which many fans thought would get better after a horrendous 2010 season.

The A's got a new hitting coach this season in Gerald Perry but that has not helped matters.

Here's a look at the woeful stats and numbers so far this season.

Second to last in home runs in the majors with only 32 homers. Josh Willingham leads the team with 10 homers.

Second to last in the AL in batting average. They are only batting .240 as a team.

Third to last in runs per game with only 3.54 runs

Players like Daric Barton, Kurt Suzuki, and Hideki Matsui were counted on before the year started to be run producers but all three batters have struggled mightily so far.

2B Mark Ellis is only batting .214 with one homer and SS Cliff Pennington only has a .256 average with a poor .307 on base percentage.

The A's got swept at home by the Yankees and now embark on a 10 game road trip to Boston, Baltimore, and Chicago.

f they have a bad road trip, I would not be surprised if GM Billy Beane fires his good friend Bob Geren.

Things need to change soon for the better or Geren could be the scapegoat.
Posted by D Wizzle at 9:41 AM No comments:

Overall show was just ok. The main event and co-main event were not very good fights.

Rampage Jackson did enough to earn a title shot against Jon Jones but not many will pick him to win against Jones.

Hamill said he would break Rampage's will but it was Hamil's will that got broken during the fight when he was unable to take down Rampage in the fight.

No surprise that Rick Story upset Thiago Alves. Alves has trouble with wrestlers and Story had a great game plan.

Fans booed Story because they wanted to see Alves deliver a highlight-reel knockout.

Rampage got booed as well because he couldn't finish Hamill. It was smart of Rampage to not mention the boos during his post-fight interview with Joe Rogan.

Brian Stann was impressive against Jorge Santiago. No surprise that Santiago lost as he has not been successful in the UFC and has been knocked out a lot in his career.

San Francisco's Chris Cariaso fought well in his decision loss to Modesto's Michael McDonald. I think the fight could have gone either way.

Middleweight Tim Boetsch looked great dominating Kendall Grove. It seemed like he broke Grove's will during the fight with his ability to take down Grove.

Most controversial fight was Demetrious Johnson's decision win over Miguel Torres. The back and forth fight could have gone either way but the judges gave it to Johnson.

Dana White was critical of Frank Mir and Roy Nelson for their performances. I don't know what White expected from them. These are two big heavyweights and it wasn't a great match-up to begin with.
Posted by D Wizzle at 8:44 AM No comments: