White said the UFC will probably go to Seattle before they go back to Portland again when they have another show in the Pacific Northwest. He said that the UFC made a mistake with the ticket prices this time (tickets were too pricey) but he was happy with the turnout.

Although there were a lot of knockouts this evening, none of the fighters had to go to the hospital.

Chuck Liddell was texting White all night long and he wants to get back into the cage.
White was asked about Todd Duffee and White said he likes him and that Duffee wants to fight again soon. Duffee told White after the fight with Tim Hague that he wants to fight a top opponent soon.

White thought that Couture was done about ten times in his fight with Nogueira.
He was asked about doing five round fights for non-title fights and White said he won't do it even though he would like to see some fights go five rounds. He said that fighters in championship fights earn the right to fight five rounds.

Couture came to the press conference late and announced that he signed a 28 month contract for six fights earlier today but he also said he plans to take it one fight at a time. He doesn't know if he wants to stay at heavyweight or move back down to light heavyweight.

He said the contract insures that he will be staying with the UFC and he won't be in another organization.

Roshalt said he wanted to stand up with Chris Leban to show everyone he is not just a wrestler.

Marquardt said he doesn't care if his next fight is against Anderson Silva or another top opponent.

Nogueira stated that he had staph infection a few weeks before his fight against Frank Mir and that he had a fever a week before the fight. He said he was ready to fight five rounds tonight and that he respects Couture a lot and that is why he trained so hard for tonight's fight.

Vera said he wanted to knock out his opponent, Krzysztof Soszynski with his hands tonight but that Soszynski was very tough.
Posted by D Wizzle at 11:14 PM 110 comments: 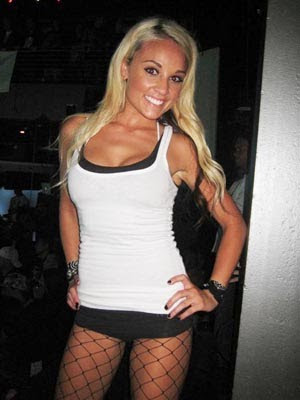 Strikeforce Interim Lightweight Champion, Gilbert "El Nino" Melendez will be the special host tonight at " Pure Pankration 2" at 1015 Folsom in San Francisco.
There will be 12 total fights tonight and some of the fighters are from Ralph Gracie Jiujitsu, GracieFighter Team Black, Fight and Fitness, Fairtex, Jake Shields American Jiujitsu, and El Nino Training Center.
There will be hot ring girls and go go dancers as well including a hot blonde named Megan Kamfolt( pictured above) .
The first fight starts at 8pm and doors open at 7pm.

"Carano Vs. Cyborg" Fighters Walk Out To The Cage

Here is a nice video from my friends at KNOXX. Video of the fighters walking out to the cage at the HP Pavilion in San Jose last Saturday night.

Email ThisBlogThis!Share to TwitterShare to FacebookShare to Pinterest
Labels: miesha tate at AKA, miesha tate pictures

Contest For Free Strikeforce Ticket for Carano Vs. Cyborg 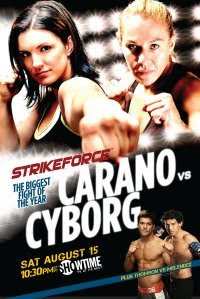 D Wizzle's World is giving out a free ticket to Carano Vs. Cyborg MMA event this Saturday night August 15 in San Jose, California at the HP Pavilion.

The winner must be able to meet in San Francisco to obtain the free ticket to the show. The ticket is in Row 7!

The winner of this contest is the first person to email D Wizzle's World and tell us who was the last Hottie of the Week before Alissa Rae Ross on this website.

D Wizzle's World gave out four great tickets to a past Strikeforce event but this time we only have one ticket to give out. Blame it on the economy and the recession!
Posted by D Wizzle at 10:13 PM 2 comments: 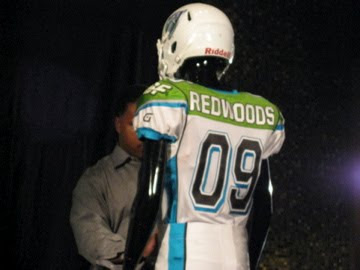 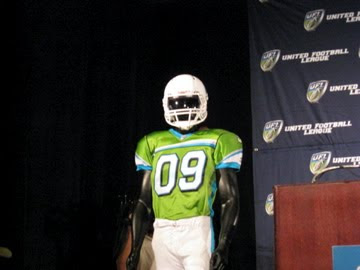 I bought the UFC 101 pay-per-view for $44.95 on UFC.com and watched it on the very small 600K media player that the website provided. The screen was so small that I had to click on "full screen" during some of the fights.

The whole show was a huge disappointment and very boring until Johnny Hendricks had a TKO win over Amir Sadollah in the first round. Anderson Silva saved the show by providing a great performance to the fans when he destroyed Forrest Griffin.

B.J. Penn's performance was impressive as well but his fight was not as exciting as Silva vs Griffin. Kenny Florian just didn't have enough tools in his toolbox to contend with Penn and he was totally outclassed.

The fans did not care about fighters such as Shane Nelson and Aaron Riley and the crowd went wild during their fight only because a big brawl broke out in the stands.

Kurt Pellegrino's win over Josh Neer was a good win for Pellegrino but it was not very exciting. Ricardo Almeida beat Kendall Grove but no one really cared about that one either.

Strikeforce has better shows than the UFC usually because they have five good match-ups on their main cards while the UFC likes to give you one or two match-ups with stars in it and the rest of the fights are with fighters that the fans don't care about at all.

I didn't pay $44.95 to watch Amir Sadollah in a pay-per-view or Ricardo Almeida. These guys should be fighting on free TV on Spike TV instead. I don't like paying so much money just to see one or two good fights but I don't have a choice if I want to see Silva fight.

Strikeforce can have better shows than the UFC because they don't have cards every month like the UFC does. The UFC has one or two shows a month and each card has about 10 fights.

I would pay to see fighters such as Silva, Penn, Tito Ortiz, Georges St.Pierre, and Anthony Johnson fight but the UFC needs to stop putting the Amir Sadollahs and Shane Nelsons on pay-per-view shows.
Posted by D Wizzle at 8:42 AM 3 comments:

Dana White says Anderson Silva is the best pound for pound fighter in the world and that B.J.Penn looks like he is in great shape and the last time he was in this great of shape was in 2001.

Silva said styles makes fights and Thales Leites wanted to take him down but Griffin stood there and wanted to exchange with him.

Penn's game plan was to take away Florian's kicks. He figured that Florian would want to kick him all night long.

White talked to Roy Jones Jr. tonight and said he doesn't like a Jones vs. Silva fight. He doesn't want to disrespect Jones Jr. but he does not like the fight at all since the UFC is MMA and not boxing.

White thinks Silva will fight Dan Henderson again in a rematch for the middleweight title.

There were 11,000 fans in the arena during the first prelim fight. That is a lot of fans for prelim fights.

White wants to come back to Philadelphia.

White says he will make Silva fight Lyoto Machida in the future if Silva keeps on taking out all the top light heavyweights in the UFC. Silva shook his head and said that Machida is his friend and brother and that he will never fight Machida.

White says that there is no reason they shouldn't fight and that it does not matter if fighters are friends since MMA is no different than a football game.

Silva said Griffin should be respected because he is a former champion and that no one should think less of him because he ran out right after the fight.

Ricardo Almeida said he would like to go down to welterweight in his next fight because he was only 187 pounds today and he felt weak in the third round against Kendell Grove due to the size difference.

White said that Tito Ortiz is fighting Mark Coleman in his return to the Octagon.

White said he is planning to have a future card in Boston at Fenway Park.

Penn credits Marv Marinovich for helping with his conditioning.

Ron Artest Can Do Two Things At Once

Email ThisBlogThis!Share to TwitterShare to FacebookShare to Pinterest
Labels: fan gets tased, oakland a's fan gets tasered by cops

Strikeforce announced this morning that they had signed Fedor Emelianenko to a multi-fight deal. This is a big coup for Strikeforce as the UFC was very interested in signing Fedor and pulled out all the stops to get him signed last week. UFC President Dana White must be really angry after hearing today's announcement from Strikeforce.

A lot of hardcore MMA fans consider Fedor to be the best fighter pound for pound in the sport. The mainstream fans are not familiar with him though and he is not a known entity in the United States. Strikeforce will have to promote him well so he can build up a strong following in this country.

Who will Fedor challenge in Strikeforce? While the competition won't be as stacked as in the UFC, Strikeforce will still have formidable opponents for him. Fighters such as Strikeforce heavyweight champion Alistair Overeem, Fabricio Werdum, Brett Rogers, and Paul Buentello are all possible and likely opponents for Fedor in the future.

Strikeforce could possibly sign former WWE supertar Bobby Lashley to take on Fedor as well if Lashley continues to progress as a MMA fighter. If fighters like Randy Couture still want a crack at Fedor, they must leave the UFC and go to Strikeforce now.

This deal looks to be mutually beneficial for both Strikeforce and Fedor. Fedor and his management sign a contract with the terms they wanted and Strikeforce now has a great addition to their heavyweight roster.
Posted by D Wizzle at 10:03 AM 10 comments: