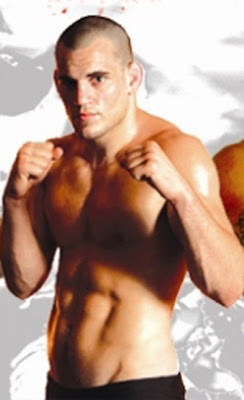 D Wizzle had the opportunity to talk to UFC welterweight fighter Jon Fitch briefly before his highly anticipated fight with Diego "Nightmare" Sanchez at UFC 76 this Saturday in Anaheim. UFC President Dana White has said this battle could be "Fight of the Year." Fitch trains out of the American Kickboxing Academy(AKA) in San Jose,California along with other top fighters such as Josh Koscheck, Josh Thomson, and Mike Swick. MMA fans are starting to know what kind of fighter Jon Fitch is as he is now fighting other top contenders and no longer fighting in prelim matches that do not air on the pay-pay-views. Fitch is one of the best fighters in the welterweight division and has won 13 straight MMA fights and six straight in the UFC.

How come you don't have a nickname and do you want one?
I think it is gay when people give themselves nicknames so I never gave myself one and no one else has given me one yet. If I'm ever given one that sticks, then cool... but I'm not going to force it.

Can you tell the fans two things that they might not know about you?.
I love cartoons. 75% of all the TV I watch are cartoons. I love stand-up comedy too.

You are from Indiana but you are not a basketball fan. What is up with that?
I just think it's boring... plus the guys act all tough and act like they know how to fight or something.

Although you are one of the best welterweight fighters in the UFC, a lot of the casual MMA fans do not know that. How do you feel about that?
I don't really care, as long as I get to fight the best guys out there and I'm getting paid for it, I'm happy.

You like to play video games. What kind of system do you have and what are your favorite games?
I have an Xbox 360. Oblivion, Fight Night 3, Gears of War, Dead Rising and Bio Shock.

You train at AKA with top calibur fighters everyday such as Josh Thomson, Mike Swick, and Josh Koscheck. Diego Sanchez left Team Jackson recently for another gym in California. Do you think this could help or hinder Diego in preparing for his fight with you?
I'm sure it won't hurt him, but I don't know if it will help him. I hope I get to see the best Diego there is for our fight. I only like fighting the best.

Are there any new fighters training out of AKA that we should look out for ?
"Sugar" Cain Velasquez..he is a heavyweight and he will be the champ in two years.

I will name a few fighters and I would like you to give a short comment about each of them if you could. Let's start off with Cung Le.
Will surprise a lot of people with what he can do
Josh Thomson
Very scrappy with a ton of skill
Trevor Prangley
Good grappler, hits like a truck
Matt Serra
I really dont know much about Matt. I only seen him fight once.
Matt Hughes
Knows how to win, good champion

He deserves to fight the best...and its about time he fights in televised matches!! I'm from the Bay Area and Ive met him many times.. He is one cool dude!

Damn! I can't wait for UFC 76! The Fitch and Diego match should be a good one!!!