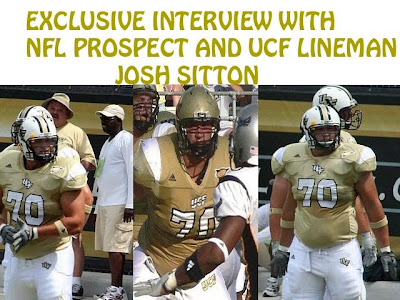 D Wizzle is back with another great interview and this time it is with NFL prospect and former Central Florida offensive lineman, Josh Sitton. Sitton is from Pensacola, Florida and can play both the tackle and guard positions. He was voted All Conference USA First Team by the media in his senior year at UCF. Sitton was a key member of UCF's O-line that helped RB Kevin Smith lead the nation in rushing. You can expect to hear Sitton's name called on the second day of the 2008 NFL Draft this Sunday.

Hey Josh, How is everything with you?
Everything is going great with me. I'm just finishing up exams and working out hard. I'm getting excited and anxious for this weekend. I am ready for this part of the process to be over. I know my family and friends are too...they're more nervous than me. (laughs)

What will you be doing this weekend? Will you be watching the draft or do you have other plans?
I finish up with my exams on Wednesday and I'm going home Thursday and just hanging out with the family. On Friday, I am planning on going shark fishing with my buddies. On Saturday, there is a mullet toss competition in Alabama that I might ride on a buddy's boat out to but I hope to catch most of the draft at a restaurant somewhere. On Sunday, I am planning on watching the draft at home with my family and some of my friends.

What was your favorite moment as a college player?
I have a few favorite moments as a college player. My first win against Marshall in 2005 is one of my top moments. UCF had lost 17 straight and I was on the team for 13 of them. When we won, the crowd rushed the field and tore down the goal posts...it was a great experience. The top moment is probably this past year when we beat Tulsa in the conference championship. The only other championship I've won was the 8th grade football championship.

What will you miss most about playing at UCF?
I'll miss a lot of things such as gamedays and the atmosphere of college football both at home and away. Most of all, I'll miss all the guys that I have become such good friends with and the times just messing around in the locker room.

How do you think Kevin Smith will do in the NFL?
I think Kevin will do amazing in the NFL. He is such a natural talent as a football player, especially at running back. He has great vision, great quickness and long speed, and the ability to make perfect cuts. He also uses his blockers better than anyone I've ever seen...he has a way of waiting on the block and making a move in the hole at the last second. Also, his knowledge of the game and the way he prepares himself for each game will make him a great running back in the league. But I don't think those things are his best assests...his ability to block and pick up blitzers is amazing. One of the reasons he was able to play so soon as a freshman was because he understood pass protections. He is also one of the toughest and most durable running backs ever. He carried the ball almost 450 times last year.

What part of your game do you think needs the most work?
I believe there is always room for improvement in every aspect of any football player's game and especially an offensive lineman. If I had to pick one thing to improve on, it would be finishing blocks. I have a tendency to look for the ball sometimes before the play is over. I don't know why I do it, but it is definitely something I can improve upon.

Thanks for your time Josh and good luck in the draft.
I appreciate you taking the time to talk with me, and to all the fans out there... have a great time this weekend and hopefully you see me in the future. Thanks!
Posted by D Wizzle at 8:09 PM

#70 Looks huge. he would be a great fit for the Saints. Imagine him blocking for Reggie!

UCF almost beat Texas last year. I hope kevin smith gets drafted in the first round. No one knows who he is and he is going to be better than macFADEen and mendenhall and the rest.

Reggie Bush doesn't even follow his blocks... all he do is dart to the outside! Smith is a different runner than Reggie. Kevin is bigger and stronger and almost as fast.

Shark fishing? That is a hobby? Sundays blocking ray lewis and merriman will be a breeze compared to that. Good luck Josh. Go Raiders!

Good interview once again D Wizzle. I can't wait for the draft. So many great running backs that you can find a good one in the later rounds. Let's not forget about Justin forsett from here. Anyone who seen him know he is just as good as Lynch. They didn't miss a beat after Lynch graduated.

They had a great year for sure and a lot of young guys must step up now with the seniors gone. I agree with Sitton saying that Kevin will be great in the NFL. Robert Smith of ESPN said the same about Smith and how he sees holes and coming from a great RB like Robert Smith, I know Kevin will be the Man.

Great to see someone cover C-USA football! Josh Sitton is a good player and so is Kevin Smith. Watch out for Joe Burnett next season. I wish Josh the very best as long as he does not become a Raider!

Raiders can get D Mac but Al Davis should just grab Ghoston first round and then grab Kevin Smith in the 3rd but we already got Bush, Jordan, Fargas and Rhodes.

We will miss all the seniors at UCF and Kevin Smith too. Sitton will be a asset with any team he hooks up with.

Looks like we got a good lineman in Sitton. I am glad we are getting guys to protect Brohm and Aaron.

I think he is going to be a great Packer!! He looks to fit right in with us. Seems like a fun guy too!

Nice article on our new guy. If he can block for kevin smith i am sure he can do wonders with our backs!

We got the best draft. Go Packers!!!