Stanford Forward Taj Finger: In his Own Words 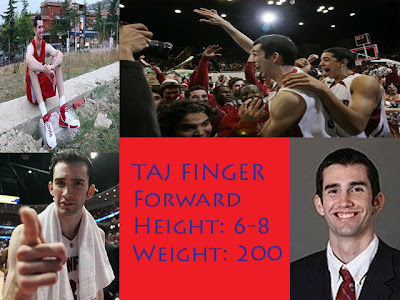 D Wizzle recently talked to Stanford senior forward Taj Finger. Finger is from Mt.Kisco, New York. Finger averaged 5.9 points and 4.4 rebounds in his senior year. He was an integral part of the team for four years and his value goes beyond the boxscore. Every team needs a player like Taj Finger in order to win games. Finger did all the little things to help Stanford win many games such as rebounding, getting loose balls, playing defense, and making key free throws.

I was extremely surprised that Coach J(Trent Johnson) left. I had no clue that any of this was happening.

I think that Josh Owens and Will Paul will step up the most next year. They will have to because we lost Robin and Brook.

The best player that I ever faced was Adam Morrison.

It is very weird that Coach Montgomery will be coaching Cal, but I can completely understand his decision.

After I graduate and I'm done playing basketball, I think that I would like to do something with television or movies, either producing, directing,or writing.

My most memorable game is Senior Day at home versus Washington State.

The only regret I have at Stanford is that I wish I took more classes that interested me.
Posted by D Wizzle at 10:25 AM

Thanks for covering Stanford hoops! Taj Finger will be missed! So will the Lopez Twins and Freddie and Trent Johnson and Goods

Go Cardinal!! Taj would be a good Warrior. He can rebound and block shots.

He had the coolest name in all of sports!

Who are Josh Owens and Will Paul?

Owens and Paul are the future of Stanford ... future begins now