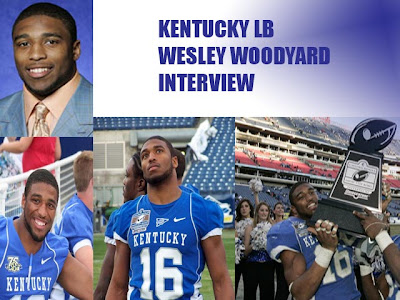 D Wizzle just finished talking to NFL prospect and former Kentucky linebacker, Wesley Woodyard. Woodyard has been terrorizing SEC offenses for the past few years and now this talented player will be waiting to hear his name called in the 2008 NFL Draft this weekend. Woodyard is from LaGrange, Georgia and led the SEC in tackles in 2007.

What do you think you will miss most about playing at Kentucky?
I'll miss all my teammates, coaches and the best fans in the SEC who packed Commonwealth Stadium every game.

You were coached by the 49ers staff in the Senior Bowl. Did you learn anything from Mike Singletary along with the other coaches?
The coaching style of the 49ers coaching staff was much like the style that my coaches taught at Kentucky. Coach Singletary was very uplifting and encouraging. He told me that I reminded him of himself when he was coming out of college because of my size and my love for the game. He also told me that I would be a great NFL linebacker one day if I kept working hard and continued to love the game the way I do.

Who was the best player you played against in your college career?
I would have to say Ronnie Brown(former Auburn running back and current Miami Dolphin). He made a lot of plays and it seemed as if he didn't need an O-Line sometimes.

What are your plans for this weekend? Will you be watching the draft?
I'll be in LaGrange with my family just relaxing, cooking out, and spending time with family and friends. I don't plan on watching the draft, but I will keep track to see when my teammates, and the players that I trained with and played in the Senior Bowl end up at.

Thanks for your time Wesley and good luck with the draft. I look forward to seeing you do great things in the NFL. Do you have any final words?
Thanks for the time and support, I appreciate everyone who helped me become the young man that I am today.
Posted by D Wizzle at 8:42 PM

I graduated from Kentucky and this man is a mean lean tackling machine. He will do well whereever he goes.

I liked Woodyard but he should have stayed in Georgia and play for the Bulldogs!!! How ironic would it be if the Falcons pick him?

He seems to be a very good player and very well spoken. Good character guy and hard working

I am anxious to see where he and keenan burton and rafael little and andre woodson and also jacob tamme. All solid players and winners.

hey, here is the site i was talking about where i made the extra cash, I was making about $900 extra a month...
check it out ..

If the 49ers like him so much he could be taken in the 3rd or 4th round hopefully. I wish they got Mayo or Dan Conner or even Curtis Lofton but maybe they are waiting for Woodyard.

This post provides clear idea designed for the new people of blogging, that genuinely how to do blogging.

I every time emailed this web site post page to all my
associates, because if like to read it afterward my links
will too.

Have a look at my web site: Juegos Gratis

Hmm is anyone else experiencing problems with the images
on this blog loading? I'm trying to figure out if its a problem on my end or if it's the
blog. Any suggestions would be greatly appreciated.

I am sure this piece of writing has touched all the internet users,
its really really good article on building
up new webpage.

Excellent article. I will be experiencing many of these issues as
well..

Thank you for any other fantastic post. The place else may anyone get that type of info
in such a perfect means of writing? I've a presentation subsequent week, and I'm at the look
for such information.

Thanks on your marvelous posting! I seriously enjoyed reading it, you could be a great author.
I will always bookmark your blog and will eventually
come back someday. I want to encourage that you continue your great writing, have a nice afternoon!

Here is my web-site; mioritice bancuri

I just couldn't depart your site before suggesting that I really enjoyed the usual info a person supply on your visitors? Is gonna be back often in order to investigate cross-check new posts

I just couldn't depart your site before suggesting that I really enjoyed the usual info a person supply on your visitors? Is gonna be back often in order to investigate cross-check new posts